Skin, Hoof, and Dental Care for Your Mini-Pig

Just as other pets require grooming, pet mini-pigs do, too. Skin, hoof, and dental care is essential to pet pigs to keep them healthy and disease-free.

What kind of skin problems can mini-pigs develop?

Dry skin. Pet pigs commonly suffer from skin conditions that may be prevented with simple treatment. The most common skin problem in mini-pigs is dry skin that results from a dietary deficiency of fatty acids. The best way to prevent this is to ensure that the pig is eating a nutritionally complete and balanced pelleted pig chow formulated for mini-pigs (see handout “Feeding Your Mini-Pig” for more information). If your pig is on a good diet and still suffers from dry, flaky skin, the amount of fat and vitamin E can be increased in the diet, or commercial omega fatty acid supplements, labeled for dogs and cats, can be offered. All dietary supplementation should be done under the supervision of your veterinarian so as not to upset the pig’s overall nutritional balance.

"The most common skin problem in mini-pigs is dry skin that results from a dietary deficiency of fatty acids."

Sarcoptic mange. Mini-pigs commonly suffer from sarcoptic mange (also called scabies) caused by mites that are potentially transmittable to humans. Signs in pigs include thickened, itchy, red, flaky, crusty, scabbed skin, plus weight loss and lethargy. If you see these signs in your pig, he should be examined by your veterinarian as soon as possible. Your veterinarian will likely do a skin scraping procedure in which he or she scrapes the surface of the pig’s skin with a scalpel blade to gather skin cells for microscopic examination. Mites are easily identified and treated with 2-3 injections of an anti-parasitic drug given a week apart. It is important to thoroughly launder all bedding the pig has been in contact with and all carpeting or rugs the pig has walked on must be completely vacuumed in order to avoid reinfection or spread to other pets and people in your home.

Yeast dermatitis. Your veterinarian must differentiate sarcoptic mange from dermatitis (inflammation) of the skin with yeast. Yeast dermatitis may cause similar signs but is typically less itchy than a mite infection and may be identified by the presence of numerous yeast on the skin under the microscope. Yeast is treated by bathing the pig with antifungal shampoo.

Parakeratosis. Sarcoptic mange and yeast infection also must be distinguished from a more serious skin condition in pigs called parakeratosis which is marked by thickened, crusty, scaly skin that is typically not itchy. This condition is caused by a dietary deficiency of both zinc and fatty acids, most commonly seen in pigs fed a diet composed mostly of baked goods or unsupplemented cereals. Your veterinarian will treat this condition by prescribing zinc and fatty acid supplements.

Sunburn. Sunburn also happens in white or spotted mini-pigs that have minimal pigment in their skin. Sunburned skin in pigs appears red, painful, and sometimes blistered. Skin on the tips of the ears, nose, back, and nipples are most commonly affected. Affected pigs should be seen by a veterinarian who will likely prescribe topical or oral anti-inflammatory medication. Sunburn can be prevented in mini-pigs by ensuring they have a shaded area when they are outside.

What kind of hoof care do mini-pigs need? 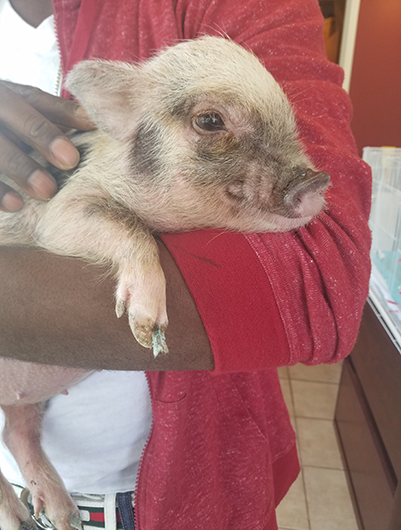 Like the hooves of horses and cows, those of mini-pigs grow continuously throughout life and need to be trimmed periodically. The frequency that hooves need trimming depends on how active the pig is and on what kind of flooring it spends most of its time on. Pigs housed on rougher (concrete) floors may wear down their hooves more quickly than those housed on soft flooring. Older pigs that walk less because of arthritis may need more frequent hoof trimming.

"Mini-pigs hooves grow continuously throughout life and need to be trimmed periodically."

Pet pig owners should train their pets from a young age, using food rewards, to be comfortable having their feet touched and their bellies rubbed, while they lay on their backs, to have their hooves trimmed. Hoof trimming is generally performed by a veterinarian during an examination. Many untrained pet pigs object to having their hooves trimmed and must be sedated at the animal hospital to have this procedure performed.

What type of dental care do mini-pigs require?

The canine teeth (tusks) of male pigs grow throughout life, while those of females stop growing at about two years of age. Unneutered male pigs' tusks grow faster than those of neutered males. Untrimmed tusks can get caught on cages, furniture, or other objects or grow so long as to cause damage to the face and gums. Overgrown tusks also are sharp and can inflict injury to caretakers.

Typically, unneutered males’ tusks generally need trimming every 6-12 months versus those of neutered males that need trimming every 1-3 years. Starting after the pig is about a year of age and usually after giving the pig a sedative, your veterinarian will trim tusks during an examination. The tips of the tusks are trimmed with a cutting wire or a drill. Clippers should not be used, as they can fracture the teeth and damage the root. Tusks should not be trimmed too short, or they may become abscessed and need to be extracted. Other than overgrown tusks, dental problems are rare in mini-pigs.

© Copyright 2019 LifeLearn Inc. Used and/or modified with permission under license.

Have a Question? Need to book an appointment?

Connect with us and one of our team members will be happy to assist you.